Differences Between SBLC and Commercial Letters of Credit

26 Aug Differences Between SBLC and Commercial Letters of Credit

A standby letter of credit is a bank’s undertaking of fulfilling the applicant’s obligations.

In case, the applicant can’t fulfill contractual obligations against the beneficiary of the standby letter of credit, then the beneficiary can apply to the issuing bank for full compensation.

A commercial letter of credit means any arrangement, however named or described, that is irrevocable and thereby constitutes a definite undertaking of the issuing bank to honour a complying presentation.

Commercial letters of credit are mainly used as a primary payment method in export and import of the tangible goods in international trade. 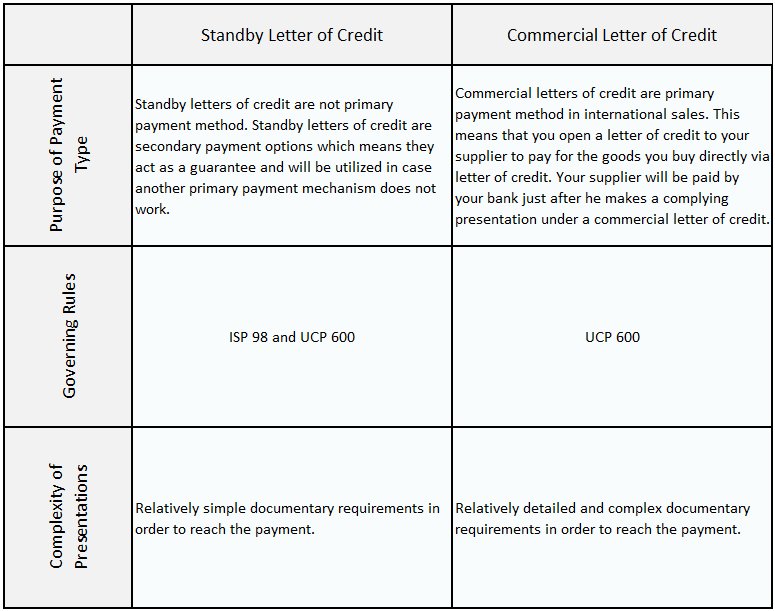 Both standby and commercial letters of credit;

ISP 98 is the set of rules that governs standby letters of credit. They have been published by ICC Banking Commission. ISP 98 – International Standby Practices ICC Publication No. 590 , 1998 Edition. ISP 98 is in force as of January 1, 1999

ISP 98 – International Standby Practices is the title of the book that is published by ICC to govern the standby letters of credit transactions (SBLC ).

ISP 98 is both available by e-book format and hard copy. It is sold under online ICC Bookstores. You can buy ISP 98 from this link.

ISP 98 has been reduced the cost and time of drafting, limit problems in handling and avoid countless disputes and unnecessary litigation that have resulted from the absence of internationally agreed rules on standby letters of credit.

The 98 Rules in International Standby Practices (ISP98) offer a precise and detailed framework for practitioners dealing with standby letters of credit.

Developed by the Institute of International Banking Law and Practice, endorsed and published by the International Chamber of Commerce (ICC), ISP98 is the standardized text for the use of standbys worldwide.