Posted at 01:28h in Uncategorized by admin 0 Comments
0 Likes
Share 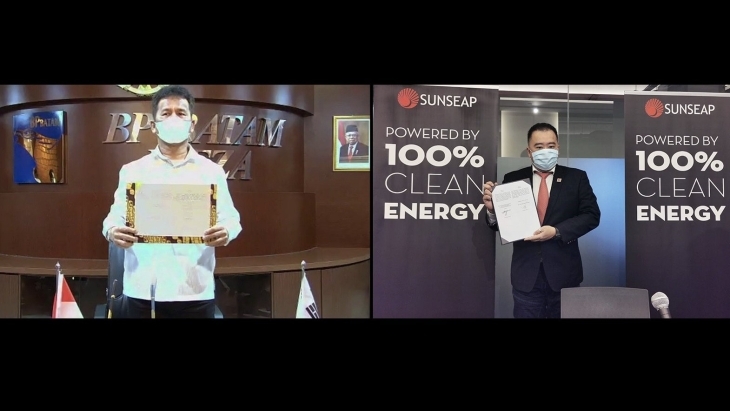 It will also act as an energy storage system.

Singapore’s Sunseap Group and Indonesia’s Badan Pengusahaan Batam have signed a Memorandum of Understanding to build a floating photovoltaic system and energy storage system costing an estimated $2b, on a reservoir in Indonesia’s Batam Island.

The floating PV system and energy storage system will be located on the Duriangkang Reservoir in the south of Batam Island. The floating solar farm is projected to have a capacity of 2.2 gigawatts and will span around 1600 hectares, making it the largest in the world. The energy storage system, also the largest around, will have a storage capacity exceeding 4000 megawatts per hour

Duriangkang Reservoir is the largest reservoir in Batam and was originally a saltwater bay. With a volume of 101.2 million cubic metres, it supports more than 50% of the freshwater supply to Batam Island. The floating solar panels will help to reduce evaporation, thereby retaining more water within the reservoir. Simultaneously, the water will keep the solar panels cool, thereby generating more clean energy and creating a synergistic relationship.

Sunseap expects the solar farm to generate more than 2,600 gigawatt hours of electricity per annum, potentially offsetting over 1.8 million metric tons of carbon per year. This is equivalent to taking some 400,000 cars off the road each year.

Sunseap is also planning to set up a Sunseap Academy in Batam, which will see to the hiring and skills sets transferred to more than 3,000 locals who will be involved in the project.

“This hyper-scale project is a significant milestone for Sunseap coming soon after we had completed Singapore’s first offshore floating solar farm along the Straits of Johor. We believe that floating solar systems will go a long way to address the land constraints that urbanised parts of Southeast Asia face in tapping renewable energy,” Frank Phuan, co-founder and CEO of Sunseap, said.